Sharing God's comfort with the terminally ill, their loved ones and caregivers. 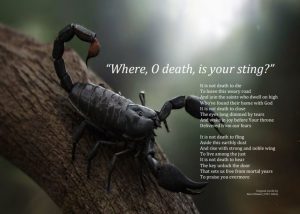 Passenger Richard Bell, was on a United Airlines flight home from Houston to Calgary when it happened. He was enjoying his lunch in business class when a scorpion fell from the overhead luggage compartment onto his head! Not realizing what it was, he picked the creature from his hair, holding it out by the tail. That’s when a fellow passenger told Richard the bug was potentially dangerous.

“So I dropped it on my plate and then I went to pick it up again, and that’s when it stung me.” Richard said.*

Flicking the scorpion onto the floor, a flight attendant covered it with a cup, stepped on it and disposed the crushed remains down the restroom toilet. The Airline no doubt lost some customers after that incident. After all, who would want to get on an airplane thinking a scorpion might sting them?

Richard’s experience highlights a situation where, given a choice, every one of us, I think, would prefer a scorpion’s sting. Which sting would you rather feel? To sit on an airplane and experience the sting of a scorpion or to feel the sting of a loved one’s death?

The sting of death is universal. History is littered with agonizing stories of bereaved souls desperately trying to anesthetize themselves from its awful pain. The Bible, too, has much to say about the subject; it neither hides nor goes around the realities of death. The scriptures explain how,

…sin entered the world through one man, and death through sin, and in this way death came to all people, because all sinned -Romans 5:12 NIV

The Bible also explains how the Lord Jesus came to earth as,

…the one who loves us and has set us free from our sins at the cost of his own blood -Revelation 1:5 NET

After his crucifixion, Jesus lay dead in a tomb for three days. Then on the first Easter Sunday long ago the miraculous happened! Jesus was raised up alive, very much alive. He said,

I am the resurrection and the life. The one who believes in me will live even if he dies… -John 11:25 NET

This is hope! Jesus offers a divine antidote to death’s awful sting— resurrection! Just as God raised Jesus to life, he will raise each one who believes in him. Resurrection from the dead is a promised reality for every one who takes God at His word. Jesus explained,

…this is the will of the one who sent me—that I should not lose one person of every one he has given me, but raise them all up at the last day. -John 6:39 NET

Every grave stands ready to give up its dead at God’s command. Death is no match for the all-powerful, life-giving Creator of the universe. On that future day, death will be defeated—it’s awful sting removed! Death, as it were, will hear the victorious taunt of resurrected souls shouting,

For the believer in Jesus Christ, death doesn’t get the final say… Jesus does.